At our meeting on Tuesday 23rd February 2010 we had a go at calligraphy. This is a highly skilled task requiring patience and dexterity. We hope that our Youth Forum group will be able to use this skill on our actual Remembrance Book. Our picture shows Daniel Dewhurst trying out Calligraphy with some of the other Youth Forum members. 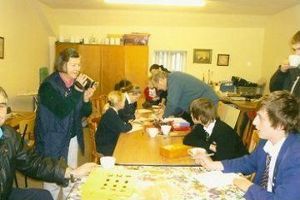 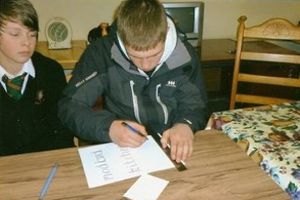 A filming session that was meant to take place on Tuesday 15th February, with people meeting at The Castle Museum for 4pm was cut short as a result of the heavens opening! consequently filming had to be cancelled. Morgan Rawcliffe and Morgan Kennedy decided wait for it to dry with a little improvement later on and still wanted to photograph the Memorial, Castle Keep and other parts of this area. Both girls are seen here looking at the Memorial. They did have several goes at getting Rogers film gear out but the rain came down again. All credit to them. 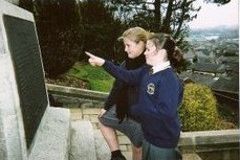 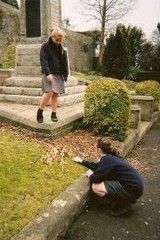 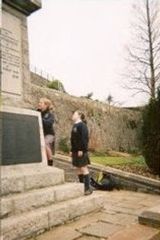 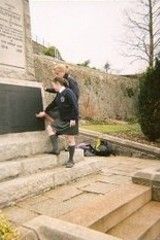 Here is Clitheroe Youth Forum being presented with a cheque from the Heritage Lottery Fund. This photograph and write up that appeared in the Clitheroe Advertiser - having been taken on Tuesday 19th February at 4pm. Not everyone could make it on time.The picture shows young Morgan Rawcliffe seen holding the cheque with myself.

Thanks to the local press for turning up. 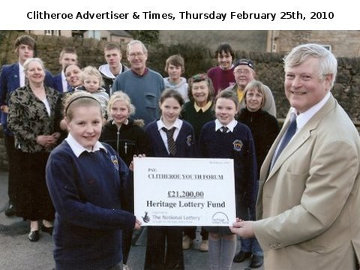 On Friday 19th March we went off to the Lancashire Radio Station in Blackburn to be interviewed by John Gillmore starting at 3pm. Daniel Dewhurst and Arron Ripley represented the youth members. Roger Leach also attending taking films and recording and this should soon be on our website.

I had already sent to the editor (Caroline) the week before the information on this subject and it was brilliant to see it all on her screen with edited sections being sent to John Gilmore. Thanks to Beryl Taylor informing them of this project. A quick run through was given by Caroline to us as to the questions and then we were all set. The lads were a little nervous of course but soon settled down into the comfortable chairs.

John put us all at ease and Roger settled in to filming the whole thing including sound. The lads did well answering the questions put by John and I gave some background as to how this started. The highlight was when John talked to Daniel in more depth about one of the photographs of him having a go at calligraphy. Daniel said it was some fancy religious writing and wouldn't be doing anymore of that! 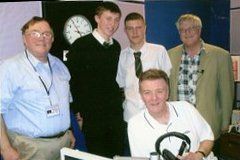 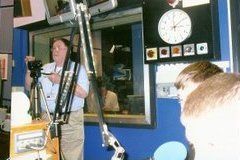 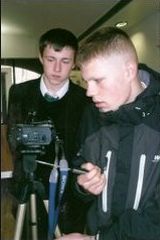 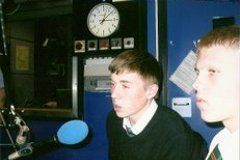 Great stuff with Caroline the producer giving a thumbs up to that in the background.
The main point of the interview was to get the message out that we wanted people to contact us with their War time stories and this we did.
Pleased to say that we had 5 phone calls from this programme.

Thanks to everyone concerned with this and a photograph has gone to John with our appreciation.
Mel