Clitheroe Radio Friday 26th March 2010. Top photo shows Roger and Arron being interviewed by Frank at Clitheroe Radio Station (Internet) and the picture below shows Arron getting himself ready to be questioned. Both Daniel and Arron did well and were certainly given some searching questions by Frank such as " Has this project given you a better perspective of the older generation?"

Arron: "I have always got on well with older people and have great respect for them." Nice one Arron!

Frank to Daniel: "Who was fighting in the Second World War"?

Daniel: "There was us against them Germans and them er Russians" !!!!

We will be talking a bit more about who was actually fighting to Daniel in more depth.

Roger was stating on Radio about his involvement and how he had been down to Low Moor to film which was the site of the Royal Engineers during the War.

All in all a good experience and thanks to Frank and Clitheroe Radio. 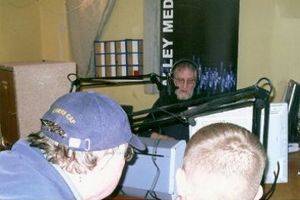 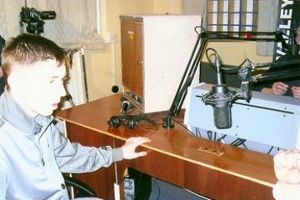