Clitheroe Youth Forum was formed back in 1998. Its original beginnings were founded from an encounter I had with about 14 young people at midnight if not later in the Town Hall Car Park, in Clitheroe. Mine was the only car left in the car park and the majority of these youngsters aged between 11 and 15 were on or around my car with several others climbing over the nearby roofs with one trying to get into the parking meter and another the sand gritting box. I also remember two trying to get under the security rails to the Mayors car. 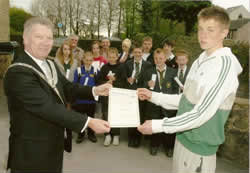 I had a couple of options - come back tomorrow after going home in a taxi -possibly to find my car wrecked or certainly no wheels or radio etc.

Walk across to the nearby police station.

I was also wondering why such young lads would be out at such a time especially as it was so cold.

I did try to identify straight away the leader of this group and thankfully got it right.

I didn't shout or wave my arms/stick about.

I did say to the lad trying to get money from the parking meter that it would have been emptied long ago -he just glared at me but he too looked to the leader.

I said good morning and hello and my name is Mel - what's all yours -looking at the leader.

Not an immediate response of course as he was looking me up and down and at that moment must have been wondering if he should give the order to have the rest of the crew mug me -turn me over or actually say hello back to me.

Thankfully there was a reply of some sort.

The majority of the others had by this time come around and been called off from their other pursuits by the leader.

I was still there three hours later with them all and his number 2/3 and 4 in the pecking order in the car talking to me.

The others hung about and sat at the side of the car.

They had all been excluded from main stream education and the local youth services.

Some on the fringes of the courts system and one or two in it with a couple about to go to court.

I did ask about why they were wanting to get at the Mayors car with an answer that they had nothing -so why should one person get to be driven round in a big black car costing thousands!

I could spend pages and pages on the discussions that night into the small hours of the morning but I mainly listened.

I said I would meet them at a more reasonable hour to look at what we could do together to do positive activities as they had mentioned so many things that they wanted to have a go at.

We met generally at 8pm at the Clitheroe Market or in the Castle Grounds park under a path light which for them was early.

I had also started to check out the youth services and they had all been banned and a lot more. In fact there were more young people outside chatting with me than in the youth club!

At one meeting I had over fifty young people and we elected a chair and committee and then met in a cafe -yes in the afternoon. Wonderful. The leader who I met became the Chair in this first phase.

They actually had something to get out of bed for.

It would take some time to have a morning meeting.

I got short shrift from the Police (who were just happy to arrest them -I was not impressed), Youth Services who again took ages to meet me and were basically not interested and the Ribble Valley Borough were the same I was even less impressed with these officials.

This was an uphill task to say the least.

I paid for some trips myself for quite some time with the young people chipping in 20p or similar and arranged informal football matches, boxing training over in Burnley some music sessions in their homes. I started off with about sixty wanting to have a go at boxing and within weeks of doing this I was left with three with one lad going onto the Army and fighting for his regiment and still doing this. Sixty to get one who actually wanted to be a boxer! The others all said they were street fighters!

I have never seen so many lads throwing up at one time after just a few runs round a gym!

I did then start to break down their individual interests and worked from there (Voluntary of course as always).

The young people then submitted with help some funding applications to sources that I had found out about but we needed a proper base.

After months of trying to get hold of him Geoff Jackson at Trinity finally agreed to meet me.

He did agree that if I could get some funding together he would try and find a night or a few hours to have the Trinity Centre available if I could man it with the older lads to start with.

We got the funding and started with DJ/MC nights and it was packed.

I applied for some Connexions Funding which came through at something like £25,000.00 and this paid for a full time person and admin back up and the hire of the Trinity Centre for a couple of nights a week having ousted the LCC Youth Workers etc along with trips, residentials and activities.

Funding had to be maintained and this was achieved and all credit to those young people who I met along with many others in those early days.

We did still lose a couple to the court system and they ended up in jail and sadly have been on that downward cycle ever since.

However, a large number from those early days are now in the Armed Forces and they would tell you that they well could be in prison had they not been directed -helped to do this.

Others have got good jobs and doing well and driving cars -or most of them. A number are now parents and married or living with their partners.

I helped out still from behind the scenes at Trinity again getting them funding for the young people and at the same time the forum took a back seat to support this process which was again starting to link up with the LCC Youth Services.

It again started to become more complicated with having to apply three months in advance to take young people on a trip and fill in endless forms.

I even got fishing gear worth about £3,000 and we were then not allowed to use it as it was harmful to fish. Couldn't then take part in competitions as it wasn't right to compete.

It became unworkable as far as I was concerned.

I then got the young people together again and we set up our own funding bids once more but Trinity then wanted an ever large slice of these funding bids to pay for telephone, heating, lighting, other staff time and staff which I wasn't totally comfortable with.

I took the Forum away and met again in cafe's using my home as a point of contact etc.

Trinity within a year or so collapsed.

I am proud of all those young people who have been involved and I thank them.

The small percentage I am just sorry that they ended up in prison and for some it is too late at the age of 13, 14 and 15 -not all but if funding and more help could be given for those at 6 or 7 for several years then I know this would pay even better dividends for all concerned.

"If you stop my kid from going to Jail and not following in my footsteps -I'll do you".

Thankfully his ex wife and Mother to the lad came out and hit him.

It has not all been plain sailing.

We had 4 lads who went off to Scotland to a National Outdoor Activity Centre the second week of the Easter Holidays in 2010 as an example of what we get involved with at a National level. 70 young people took part in a go kart session in Manchester, Colne and Blackpool. Eighty young people on average take part in climbing, archery, orienteering, air rifle and other healthy challenging activities during school holidays. We have had several trips on Tall Ships which have been brilliant experiences for those involved and we did this through the Lancashire Association of Clubs for Boys and Girls.

One of the biggest project has been the Remembrance and Braille Books and website dedicated to the servicemen and women killed from Clitheroe and across the Ribble Valley. This project is well documented and saw the group win three National Awards and more importantly enable hundreds of war medals to be presented to veterans, families, widows and widowers through various ceremonies.

I don't know how much longer I can continue as my health is getting worse but hope that in what time I have left I can be of support and assistance to a few more young people.

Once again my thanks got all those I have met and hopefully aided/helped a little -some more than others!

It wouldn't be fair to not now mention that in the last few years or so the Lancashire County Youth Services have been helpful and supported our bids especially through the Youth Bank in its early days which has enabled so many projects to take place so this is very much appreciated but it has been a long haul. The Clitheroe Town Council and Ribble Valley Borough Council have also helped and over the last few years Ribble Valley Homes, LANPAC, Sported, Co-Operative, Awards for All and of course the Heritage Lottery.