The Lancashire Association of clubs for Young People organised a 5 a side football competition at JJB Sports Stadium Blackburn in early October 2009. The Youth Forum lads went on to compete at the North England finals at JJB again in late October, coming runners up against a team from Newcastle.
This was still enough to send our team to the National Finals in Manchester in early December. However the competition was fierce, with some of the teams players from London having exceptional players who play for Tottenham and Chelsea. Overall an excellent achievement for our local team to reach the national finals. It was a good experience for all those involved - Always next year lads!

Our picture shows our winning 5 a side football team. Captain Nathan Nettleton is pictured in the bottom row, second from the right. 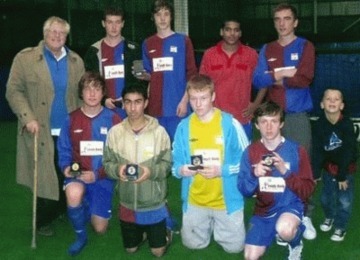